Need a solid entry-level mountain bike that won’t break the bank and is trail-ready right out of the box? Raleigh may have your answer in their Talus 3 cross country hardtail, though for the price we feel that there are some areas Raleigh could do better.

Even so, for beginners looking for a low-cost starting point with plenty of room for updates, this is not a bad choice considering the high cost of even an intermediate bike. In this Raleigh Talus 3 review, we deep-dive into the benefits and drawbacks of this popular MTB.

Keep in mind that it is low-end and features an inexpensive part group, including its outdated 3 x 7 drivetrain and inexpensive Tektro brakes.

In fact, if you are an athlete who will quickly outgrow the lack of gear range and springy front suspension, you may want to consider just spending more in the first place.

But if for those unsure of their long-term interest in mountain biking who are simply dipping their toe in the waters, it is hard to beat the Raleigh Talus 3. 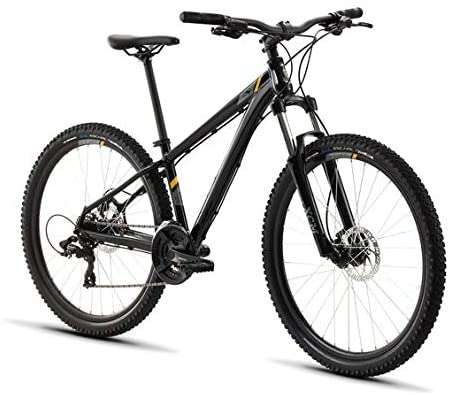 First, let’s fill you in on why you’re getting your money’s worth, starting with the price: With an SRP below $600, you won’t be breaking the bank just to find out if ripping singletrack is your thing. In fact, even if your skills never make it to the point that you’re comfortable navigating rocks, roots, and bumps, the Talus 3 still makes an excellent, reasonably priced commuter or bike path cruiser.

It also comes with 27.5 (650b) wheels, hydraulic disc brakes, and a 6061-aluminum frame, all of which set it apart from the price-point offerings of many other manufacturers. Typically, low-end mountain bikes (MTBs) come with 26” wheels, V-brakes, and mild steel construction, all of which are now considered outdated for serious use.

But the larger diameter wheels roll smoothly across ruts that would eat up 26” wheels, and the brakes modulate nicely despite Tektro’s reputation as being a “cheapy” manufacturer. In fact, while there was a time when stopping safely meant avoiding Tektro products altogether, that is no longer the case since the company has done an outstanding job of improving performance while keeping the cost low.

So far as the 6061-aluminum frame, it’s about what you’d want in a good frame—especially when you consider that in many cases, 600 bucks will buy you little more than a frame alone. Yes, it is beefy and a bit heavy, though that also means there is little chance of it breaking under abuse.

Granted, we’re not advocating that this bike to be used for anything other than its intended conditions and speeds, though you also don’t have much to worry about if the nephew sneaks it out to the dirt jumps just to see how high it can fly.

The geometry features a stable and forgiving 69.5° head angle, and the lengthy top tube gives you plenty of room to stretch out on longer rides. The 73° seat angle puts you in a nice, efficient pedaling position without sacrificing comfort, and the alloy post makes swapping out the stock saddle relatively easy—which brings us to the things which aren’t so great.

While the Talus 3 is mostly a good starting point for novice riders, there are some parts that will need changing sooner than later, and others you can worry about changing as your skills develop and old parts wear out.

For instance, while the stock saddle may be good for something, that “something” isn’t sitting comfortably while pedaling a bike. That’s because even though it is padded reasonably well enough, the padding covers a square-ish base which quickly becomes painful as you ride. Granted, this is typical of nearly any inexpensive bike seat, though our advice is to swap it for any decent mid-priced saddle before doing anything else. The WTB Rocket Comp is a good example that comes to mind.

It is also heavy, with the XL model weighing in at a reported 31-lbs. This is mostly due to the entry-level parts and beefy frame, and while it isn’t a huge deal for most beginners, more serious riders will likely want to pare things down to a more reasonable weight.

Next, there is the gearing which, to be honest, might be a deal-breaker for some. That’s because in this day-and-age of 1 x 12 gearing, why go with something as obsolete as a 7-speed cassette and 3-chainring crank? A 9-speed group isn’t too expensive and would offer a superior gear selection, and economy of scale is also bringing the cost of modern 1×10, 11 or 12 gearing within reach of this price point.

As if to make matters worse, the 24 x 32 “granny” gear is better suited for seasoned riders with bulging thighs than for newbies looking to get in shape, and at the least should be replaced with a more knee-friendly 22 x 34 gearing.

But, since the cheap Shimano Tourney crankset uses stamped steel chainrings that are riveted—not bolted—to the spider, dropping to more novice-friendly gearing upfront means getting an entire crankset instead of just chainrings. Since 7-speed cassettes aren’t widely used any more, they also don’t come in wide varieties of cog sizes, and the wider the range on them, the bigger the jumps between gears.

There is also the Suntour XCM-DS front suspension, which is mostly fine to get you going. It is heavy though, and while it delivers a cushy 100mm of travel, it is springy and could use rebound damping. It also doesn’t have any air adjustment and instead, uses a preload adjuster to add tension to the spring, which limits adjustability.

What this means is that as your skills develop and you are able to go faster on trails, the bounciness and lack of rebound damping can become a problem. No, it isn’t essential that you replace the front suspension since it is still serviceable for most XC riding, just that in this day of plush, adjustable air-spring suspension, why stick with bouncy old coil-springs? Front-wheel traction, handling, and your safety are ultimately what is compromised, so spending some cash here once you’re able is likely a good call.

The tires will also work for now and appear to be no-name knockoffs of Kenda Nevegals–just without the superb traction and performance. Wear them out and update them once you do; as other parts advised in this Raleigh Talus 3 review.

Finally, there are the usual cost-cutting items you would expect on a budget bike–namely the grips, pedals, and various other plastic parts. They’ll work for now, and to be honest, most upper-end bikes don’t come with ANY pedals, although popping on some updates will help your comfort and reduce your chances of broken parts out on the trail.

Is it the Right Bike for You?

Mostly, it is demonstrated in this Raleigh Talus 3 review that it is a good bike, and performs about as well as could be expected for the price. Once dialed in, the drivetrain delivers smooth shifting and easy maintenance despite its limited gearing, and as previously mentioned, the Tektro hydraulic brakes are a pleasant surprise.

The frame is also durable heat-treated AL-6160 aluminum that will not only last forever but can be continuously updated with better parts as you go along.

The rims appear to be solid and are double-walled, and the wheels are durable enough to withstand the hits they’ll take while you work to improve your bike handling skills.

An Aside: Why a Hardtail?

Speaking of the frame, let’s add in a little something about buying a hardtail vs full suspension as your first MTB: it is the best choice for you, not only since a hardtail is less expensive, but riding one helps you develop superior riding skills.

For instance, whereas having full suspension allows you to sit comfortably while allowing the shocks to smooth things out, it doesn’t teach you how to pick good lines or be an active “part” of the bike. By this, we mean involving your entire body to control the bike, counterweight, and absorb larger obstacles in much the same way as a horse rider is active while in the saddle.

This leads to poor habits, and likely more scrapes and bruises since an interactive rider who chooses—and commits to—good lines on the trail is also a safer and more in-control rider.

So, start with a hardtail—you’ll be a better rider for it.

To Buy, or Not to Buy

While the verdict in this Raleigh Talus 3 review shows that it is an overall good bike, it is possible to find other offerings in this price range that may offer better gearing and parts.

In fact, even if another bike costs more but is equipped with components that will better meet our long-term needs, consider the cost of updates along with the fact that OEM parts on a new bike are less expensive than new ones later. This means that spending more now is probably worth it, although this also means knowing that you’re committed to the sport.

But again, if you’re just dipping your toe in the waters to find out if mountain biking is for you, the Raleigh Talus 3 is an okay choice that you can either continue to update as you “catch the trail fever,” or simply leave as-is to be used as a commuter or casual around-the-block bike.

In fact, another use for a bike of this caliber would be as an adventure touring bike, which is made possible by the forgiving handling, beefy frame, and eyelets for mounting fenders, panniers, and water bottles.

And of course, there is always the less-logical reasons this bike may work well for you, such as that it looks great and has a proud and trusted brand name behind it. No, we don’t recommend you buy a bike only for these reasons, although looks DO count, and it is good to know that it won’t be hard to find a shop that carries the brand.

We trust this review of the Raleigh Talus 3 provided the information necessary to make a good buying decision.