Today we are going to do a GT bikes review. These are some of the best bikes you can purchase at a reasonable price. My favorite GT bike is the GT Pro Performer BMX Bike. I love this bike for a few reasons. First, it is a replica of GT’s most famous BMX bike from the ’80s. But it has a modern twist, and of course, modern technology.

If you have been paying any attention in the last few years, you may have noticed, the market for bikes has become ridiculously saturated lately. Well, maybe it’s more accurate to say that the market has become insanely competitive. And as any economist worth his salt will tell you; competition is always good for the consumer.

Don’t believe me? That’s cool; I’ll just give you an example. Let’s just take a look at online retailers. Now it used to be that you could only go to one or two places to get specific items. And because those items were only able to be purchased at a specific store, that store was able to charge whatever they wanted for it.

But with the advent of online shopping and places like Amazon and eBay, stores will now match the prices of those online retailers, even if they are significantly lower than the rate the store is selling it for. Who do you think wins in that scenario? The consumer.

Anyway, back to the GT bikes review. Even in this highly competitive market (or highly saturated if to prefer to be pessimistic), this company has been consistently cranking out quality bikes that fit the needs of every rider. It doesn’t matter if you race, mountain bike, BMX, or just like to cruise the streets.

GT has a bike that is going to fit your needs. And they’ll probably have it at a price that you’ll love. It is time to check out the best bikes GT has to offer. 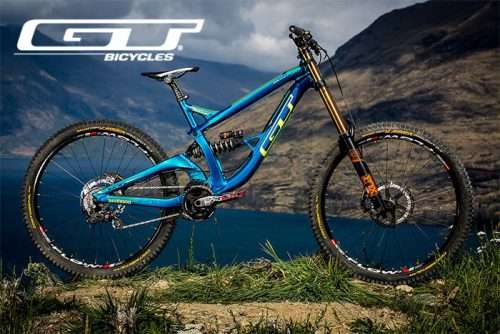 Remember when I told you how I fell in love with the BMX bike as a kid while playing a video game. This bike is the reason why. To be fair, I’m not sure if it was the same bike exactly, but I distinctly remember customizing by bike in the game just like this. Blue and yellow have always been one of my favorite color combinations, so of course, I was going to be drawn to this one.

But it isn’t just about the color; the Pro Performer BMX is awesome for a great many of reasons. First of all, the GT Heritage line up is just what the doctor ordered for those of us missing the “good ole’ days” when bikes were simple.
But more important the design of the bike is impeccable. it is a modern take on a classic bike. The most notable difference of this re-edition of the 86 BMX is that it is a 26-inch rather than a 20-inch.

Personally, I love BMX bikes, and I really love the classic look of the GT Pro Performer 26.

The GT Slammer is yet another beautiful BMX bike, though it doesn’t have the classic “badass” look that the Pro Performer has. It is a more traditional-sized BMX bike though, with its 20-inch wheels and a gorgeous-looking tube frame that has been revamped from previous models.

The thick and cushiony handlebars are great for balance and extremely comfortable when gripping them. A necessity for any bike, especially on a BMX. And even better, the brake setup utilizes a gyro system allowing the handlebars to spin freely. Again, a necessity for a BMX bike.

But what about its ability to handle the weight a BMX rider puts on his bike? After all, you are going to be doing tricks with it.
The fork has a tapered blade to help keep the weight down, maximizing the rigidity of the bike. And we already know that GT has incredibly strong frames, so yeah, the bike can handle your weight crashing down on it. This bike is a must in the list of the GT Bikes Review.

The GT Stomper won’t be passing for a top-tier performance mountain bike, but truthfully, hardtail mountain bikes rarely do. With that said, this is among my favorite hardtail bikes, and its classic triple triangle design is pretty damn sexy to look at if you ask me.

If you are just now getting into mountain biking, then a hardtail bike is the most logical bike to start with. You certainly won’t need a full suspension. And for the price of the GT Stomper, there is really no reason not to go with it.

Yes, you read that right. This is a bike for young children, and it is a pretty good one at that. If you are an avid cyclist, and you have a “little one” running around the house, then chances are pretty good that you will want to ride with them someday in the future. So why not prep them now? With the Banana bike, you can do just that.

The GT Banana bike works by teaching kids how to balance. They sit on the bike as if it were any other normal bike, but instead of pedaling they can practice balancing themselves. A balance bike allows kids to start learning to ride at ages as early as two years old.

This bike has fat tires for more surface contact area, making it a little easier to balance. There is even a break on it, although most young kids just use their feet to stop.

But why are balance bikes even necessary? That’s a good question. The vast majority of cycling instructors recommend teaching kids how to use a balance bike before a pedal bike. This is because it is easier to learn how to balance first. Then, once they are old enough pedaling comes easier to them. Best of all, there is no reason for training wheels.

What makes GT such an awesome brand for cyclists is that they have something for every occasion. They are the Nordstrom of bike companies, except they don’t sell this season’s fashion trends. They are always current with the needs of today’s riders.

I remember as a kid I used to have this game for my Sega Dreamcast (do you guys remember that system?), it was called Dave Mirra’s BMX, and it was my absolute favorite game outside of Tony Hawk Pro Skater and NBA 2K. The moment I played that game, I fell in love with BMX biking. The style, the grace, the attitude. Everything about a BMX was awesome, and it still is.

But what is a BMX bike? The most simple answer is that they are trick bikes. When you see people at parks hitting jumps, grinding down the rails of staircases, they are most likely on a BMX. These bikes are the “bad boys” of bikes.

BMX bikes are typically small in frame and have 20-inch wheels with reasonably large tires. They are small, compact, and easy to maintain, plus they’re great for beginning riders.

For most of you reading this, you already know everything there is to know about a mountain bikes. And even if this is your first time being exposed to the term “mountain bike.” You can probably guess what these bikes are used for.

But while it’s true that the overall concept of a mountain bike is pretty simple, the bikes themselves are not. In fact, there are a few different kinds of mountain bikes. But for now, you only need to know this.

Mountain bikes are made especially for rough terrain and mountainous areas, hence the name “mountain bike”. Some will have full suspensions, while others are hardtail bikes and only have front suspension. But all of them, are built for speed and durability.

Additionally, there are tons of different types of mountain bikes. You’ve got ‘XC’ bikes (or cross-country bikes), which can be split into two categories. One for racing, and one for the tails, the differences are immediately noticeable too.

You’ve also got enduro bikes, these are the most versatile of the mountain bikes and have much more durable frames than cross-country bikes do. And then you’ve got the downhill mountain bikes. They do exactly what the name implies; they go fast downhill. I’ll say this; you do not want to be the poor soul who is trying to ride his downhill bike, up a hill. You might actually pass out from the misery.

Well, now that we’ve got all of the types of bikes made by GT out of the way in this GT Bikes Review, it is time to get the final thoughts.

GT has been around since the 1970s, and they spent a lot of time at the top of the biking industry. After a while, they went a little sour, and people began to lose faith in their product. But for the last decade or so, they have made their triumphant return. And the 2021 lineup is proof of that.

Hopefully, things keep looking up for these guys. As of now, the future looks promising.