After polling many of my girlfriends who regularly use bicycles for commuting to work and for some other activities I am confident that The Pure Cycles 8-Speed Urban Commuter Bicycle stands out above the rest as an ideal women’s commuter bike. When it comes to urban rides, this one won’t disappoint. The bike provides something for everyone, from beginner to expert rider.

Nowadays, everyone is more health-conscious than they were a decade ago so commuter bikes have risen in popularity. In an effort to stay fit, people are turning to commuter bikes to go to and from work, run daily errands, or for weekend fun.  Also, riding a bike is an environmentally friendly activity. Here are the five best women’s commuter bikes on the market today. Each one provides optimum comfort and ease of use. If you are seeking a bike that is a pure joy to ride then I encourage you to deeply consider one of these rides. 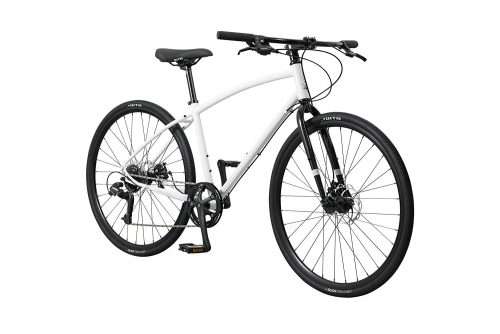 The Pure Cycles 8-Speed Urban Commuter Bicycle fits the needs of anyone looking for a daily commuter, recreational enjoyment, or exercise bike.  The lightweight commuter bike has a Chromoly steel frameset with a strength that exceeds aluminum. The frame also absorbs the vibrations of the road so no jarring or discomfort while you ride.

The eight speeds let you head up and down hilly terrain. The stopping power of the Tektro M280 brakes provides peace of mind. The dual chain guard holds the chain in place even when the pavement becomes less than ideal.

With a daily commuter, the ride must provide comfort. The swept-back upright handlebars have all-weather grips to climb or cut through traffic without ever losing control of your ride. The WTB Slick 700x32c tires grip the road even when the pavement becomes wet. The WTB extra padded saddle lets you ride for hours without becoming saddle sore.

The Pure Cycles 8-Speed Urban Commuter Bicycle has an extra paddled saddle for longterm riding comfort. When traversing the roadways on this bike, you will not become tired or sore because your body always has the support it requires.

Undoubtedly, Schwinn has made a name for itself in the biking world with over a hundred years of quality rides. The Schwinn Continental Commuter 7 Speed 700C Wheel Bicycle won’t disappoint. If you are in the market for a daily commuter then this affordable bike might fit the bill. It features an upscale commuter frame and a suspension fork to create a comfortable ride. The bike’s design holds your body in an athletic riding position that enhances the overall experience while providing you with complete control at all times.

The  7-speed Shimano Revisit twist shifter allows you to shift on the fly so you can tailor the gears to fit the terrain. Climb or descend hills with ease. The Shimano rear derailleur lets the change the gears quickly and efficiently. The sure-stop brake system lets you use one lever to engage both of the braking systems on the bike. This feature prevents you from flipping over the handlebars. The bike provides a soft and enjoyable ride.

The sleek look of the Schwinn Continental Commuter 7 Speed 700C Wheel Bicycle shouts upscale speed comfort. The fenders not only offer style to the bike’s design but also keep you drive if you ride in the mud or rain. The rear rack lets you strap down whatever you might need to carry for work or a quick ride to a local store.

Nowadays, it’s all about vintage bikes. Everyone loves the look and durability of the old-school rides. The Vilano Women’s Hybrid Bike 700c Retro City Commuter combines the bike’s fashion with its modern ease of riding. The bike’s frame has been fashioned from urban style steel for added durability and performance.

When riding the city streets, you are going to need stopping power so the linear-pull brakes are perfect. They provide balanced and safe stopping power. The 700c wheels are an undeniably nice feature. They absorb the shock of the road and provide a smooth commute. The twist grip shifter with 7 speeds lets you tailor the gears to fit the road. When riding, you won’t be struggling to climb hills because you can pick the gear you need to make the ride easier.

With the Vilan Women’s Hybrid Bike 700c Retro City Commuter Bike it is all about the look. The bike has a flashy chrome-look fender and a rear spring load rack to carry your stuff. There are also free pedals and a locking kickstand to hold the bike in an upright position when not riding. The hi-ten steel frame gives this bike a beefy and sturdy appearance. The bike weighs in at a light 32 pounds so loading it onto bike racks should never be a problem.

The Critical Cycles Beaumont-7 Seven Speed Lady’s Urban City Commuter Bike has been hand-built with a handy step-thru steel frame design. On this bike, you ride in an upright position that makes urban commuting comfortable. This bike will arrive at your door 85 percent assembled. Unlike other commuter bikes, this one comes with assembly tools and easy-to-understand instructions so you can have it ready to hit the road in no time.

The bike has a Shimano 7 speed drivetrain to let you conquer the road ahead with ease. The RevoShift grip shifters give you speed and precision control for a safer ride. The front and rear alloy brakes providing superb stopping power so you never have to worry about losing control of your ride even if after a rainstorm. The Wanda 700x35c tires grip the road’s surface when smooth or bumpy.

The appearance of the Critical Cycles Beaumont-7 Seven Speed Lady’s Urban City Commuter Bike is that of an old-school 1960s bike. You will probably be taken back to your childhood or youth when you first look at the pink beauty and you will instantly remember the commuter bikes of your youth.

However, the bike is more than just a retro look. It has actually been built to the standards of a bygone era so it will last and you can maybe even pass it down to your children at a later date. The Beaumont has a funky, pink retro paint job with matching fenders that looks fresh and crisp. The plush grips and cushy saddle make the ride comfortable. You won’t be getting saddle sore on this luxury bike. One of the really cute features of the Beaumont is the mid-century bell that lets you alert anyone in the vicinity to your presence.

Nowadays, everyone wants a retro commuter bike. The Royce Union 700c RMX Women’s 3-Speed Commuter Bike, Aluminum Frame its the bill when it comes to a vintage appearance. However, it also has a bit of an urban look about the frame. The frame has been fashioned from lightweight aluminum which lets it corner nicely. Also, the aluminum will never rust even in a humid region or beachside environment. The ZOOM suspension provides a smooth ride and absorbs the bumps of the road nicely.

You’ll never worry about becoming saddle sore on the Royce Union 700c RMX Women’s 3-Speed Commuter Bike, Aluminum Frame because the VELO saddle has dual springs for optimum comfort. The ergonomic grips mold to the contours of your hands and let you easily control the bike. Undoubtedly, the goal with the cushy grips was to provide your hands with the feeling of wearing gloves. You never have to worry about your grip slipping even in high heat.

The upright riding position of the bike eases lower back discomfort. Unlike mountain bikes, commuter bikes usually have kickstands.  The kickstand lets you easily dismount and keep your bike in an upright position.

The bike has a 3-speed Shimano Twist with a Shimano Nexus rear derailleur that enables carefree shifting with only a twist of your wrist. There is also a built-in Shimano internal hub that keeps out dirt, mud, and rain. Cleaning and maintenance of the bike is a breeze. The lightweight alloy linear-pull brakes have machined alloy wheel rims that let you stop on a dime. The all-terrain 700c tires grip the pavement and create very little resistance.

With commuter bikes, it is all about the ride. When choosing between commuter bikes there are numerous factors you should take into consideration. Picking the right bicycle is a big decision. The bike must fit your riding style and physical needs. You’ll probably pedal a lot of miles on the bike so comfort becomes a crucial feature. Ultimately, you’ll need to find a bike that feels good and fits your unique sense of style. Nowadays, there are modern and retro choices.

Some urban riders prefer a modern bike, but others like an old-fashioned ride. Remember, even if a bike has been designed with a retro appearance it still has all of the modern bells and whistles such as needed safety features. Undoubtedly, the versatility of commuter bikes has evolved to meet the needs of urban professionals.