With all of the options available to you, finding the right mountain bike can be a tiny bit of a struggle. With that said, once you narrow down what you are looking for, it becomes a whole lot easier. The first decision you’ll need to make (one that you have likely already made if you’re reading this) is whether you want a hardtail or full suspension mountain bike. This article is for those of you who already made that choice, and are now looking for the best hardtail mountain bike.

Some of you may not be interested in reading an entire article; you might only want to know which hardtail mountain bike is the best, period. Or at least which one we like best.

If you fall into that category, you need to check out the Eagle Patriot Carbon Fiber Mountain Bike. This bike is easily one of the lightest mountain bikes out there, and it handles better than any of the other bikes we looked at while researching this article.

For the rest of you who want the nitty-gritty on hardtail mountain bikes, continue reading. 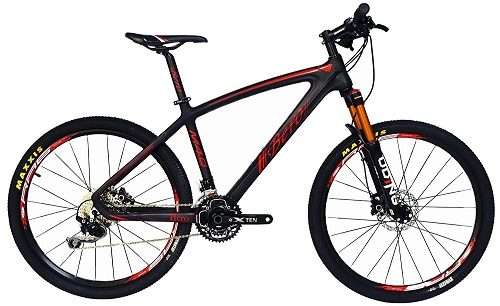 I can’t say that I have seen a bike this beautiful before. The black frame, white decals, and the golden chain give the Eagle Patriot an aura of greatness. But what matters most is that the bike lives up to its looks.

From the bikes handling, to the capacity of the frame to absorb any impact it receives; this bike is an absolute monster.  It is truly one of my favorite bikes out there.

This bike is unanimously one of the most responsive and durable mountain bikes around. It can handle damn near anything you throw at it.

There isn’t much to dislike about this bike, especially so when it comes to performance. But the bike is a very expensive one. I’d say it’s worth the money, but it is a very big investment you are going to be making.

Every aspect of this bike is built with maximum performance in mind. But more importantly, it actually lives up to the performance that it promises. The bike is feather-light and incredibly easy to maneuver. If you’re fine with the price and want nothing but the best, then you’ve yourself a great find in the Eagle Patriot Carbon Fiber Bike.

There isn’t much better than a bike that can give you the peace of mind to hit the hardest trails, with the greatest force you can muster. That is something that the Savadeck 700 Carbon Fiber bike brings to you. And it does so in a beautifully put together bike.

I think this is a bike that could really benefit from an internal cable system. With a bike that is going to be tested as much as this one will be, I can see a lot of instances where external cables could be compromised. Nobody wants those cables breaking in high leverage situations. Fortunately, Sava has done a pretty good job of securing the cables to the frame.

Coming in less than 23 pounds, this bike offers you the lightweight ride you desire with the functionality and durability that you require. An internal cabling system would go a long way towards allowing this bike to reach its full potential. But if that is my only complaint (and to this point it is), then it is clearly an excellent bike.

This is the first time (and likely the last time) that you’ll ever see something like this from me. Typically, the best bike I look at is also my favorite bike I look at. But this time is a little different. The Diamondback Mason Pro certainly isn’t the best bike on paper, it isn’t nearly as light, and doesn’t have all the bells and whistles that the other bikes have.

But, I have a lot of experience with Diamondback bikes (bias is possible here), a lot of that experience is with this exact bike. It rides beautifully, and each time I hop on this, I am overwhelmed with excitement for what I am about to do.

This bike is easy to ride, and even easier to love riding. It is fast, responsive, and powerful. I cannot stress enough, how much fun I have had on this bike over the last few months

When spending multiples of thousands of dollars on a top-notch bike, you often expect a carbon fiber frame. Well, this is an aluminum frame, it is still light enough, but not as light as the other bikes we have discussed today.

I said upfront, so I might as well say it again – just for clarity. This isn’t the best bike on paper, but it is by far my favorite bike that we looked at in preparation for today’s article. The fact that it is roughly one thousand dollars cheaper makes even more appealing. If you pure fun, then you should seriously consider the Diamondback Mason Pro.

Reasons you Should Opt for a Hardtail

Trail riding is rough, it’s grueling, and it can be hell on your body at times, and there is no secret about that. Full suspension forks allow you to ride down those trails smoothly, effectively removing all of those backbreaking divots, dips, and jumps you inevitably come across when trail riding.

But does that mean that hardtails are objectively worse than full-suspension bikes? I argue no. In fact, I can make an argument that they are better than their full suspension contemporaries. And here is why.

Suspension systems are notoriously heavy, that’s exactly why they compete with each other to cut weight. Typically, what you will see is that the suspension system that keeps its weight the lowest in the system that wins the battle. Well, if you are trying to shed weight, then hardtails are your best option. And it isn’t as though they are any less capable.

Full suspension bikes are far more intricate than a hardtail. Why? Well, because they have an entire other suspension system attached to it. This means preventive maintenance is more detailed and time-consuming. But even worse than that, it means when the time comes to put your bike in the shop; you’re spending significantly more than you would with a hardtail. This problem is exacerbated if the issue is the rear suspension itself.

Hardtail bikes don’t give you the benefit of a smooth ride. That means everything you hit, is fully felt by you and the bike. This actively teaches you how to maneuver around different obstacles more effectively. Making you a better rider, and also giving you more control over your bike.

This ties directly into the last concept. Since hardtails aren’t simply able to float over hard terrain, you are forced to learn how to roll with the ground smoothly, and gracefully. If you don’t, then you’ll either be thrown off the bike, or you’ll lose your teeth many decades before you should.

You can simply do more fun stuff on a hardtail. Bunnyhops and manually are instantly made easier on hardtails. And these are techniques that must be mastered if you want to be a serious mountain biker.

The number one reason people generally say they opt for hardtails is the price. Fewer parts mean less reason for a manufacturer to jack up prices. And as we established earlier, the simplicity of hardtail bikes means there are far fewer parts on it. Choose a hardtail, and you’ll get more bike for your money.

If you’ve made it all the way through this article, then you’ve seen a few different hardtail bikes that are simply perfect for rough trails. All three of these offer something a little bit different. But they are also all incredible bikes, that can perform miraculously when put in the hands of a capable rider.

The best bike on paper is the Eagle Patriot Gold, but that doesn’t necessarily mean it is the best bike for you. As evidenced by the fact that it still isn’t my favorite on the list.

If you didn’t find a bike that suits your needs; check out our other articles dealing with mountain bikes.