If you’re short on time and need to get straight to the best commuter bike, check out the Pure Cycles original fixed gear bike. I love this bike because it looks awesome, handles great, and you don’t have to spend a ton of money on it.

For that reason, I want to talk about some of the best bikes you’ll find for your daily commute. 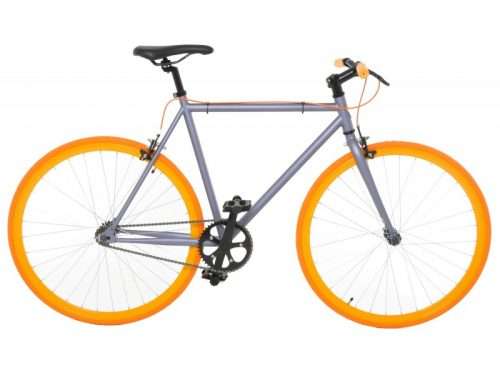 Who doesn’t love the GMC name? I know I do and love the Denali versions of GMC even more. Unfortunately, this bike isn’t going to come with the beloved ‘honeycomb’ grill that Denali vehicles come with. But you’ll still get some pretty sweet rims with it.

This is a 21-speed road bike featuring a lightweight aluminum frame and alloy side pull brakes. The Denali Flat bar uses caliper brakes rather than disk brakes. The Shimano derailleur and Shimano Revo shifters work together seamlessly making shifting between gears unbelievably easy.

You’ll love the inexpensive price point, which is great for anybody who doesn’t want to put a ton of money into a commuter bike. And if you like the GMC or the Denali name, then you’ll probably like this bike.

The Polygon Bend FX4 isn’t a cheap bike by any stretch of the word cheap. But it is a great bike that is sure to last for years to come. It uses an ALX 6061 hydroformed alloy frame that provides durability, responsive handling, and of course, is lightweight.

The Tiagra by Shimano 2×10 drivetrain is smooth and gives reliably smooth gear changing. This bike makes traversing hilly terrain as easy as you could ever ask for.

This bike is also great in inclement weather. It uses Tektro flat-mount mechanical disc brakes to provide top-notch stopping power, even on the rainiest of days.

Flat bar bikes are great for commuting, the bars make it easy to ride in a comfortable, upright position and the Polygon Bend FX4 might be the most comfortable commuter bike on this list.

You’ll love the lightweight, superb maneuverability, and amazing stopping power the disk brakes provide you with. The only setback with this is the cost of the bike. I typically don’t think of commuter bikes costing more than a few hundred dollars, and even then that may be too expensive. But this bike is even more than that.

Fixed gear bikes (or fixie bikes) were once the most popular bikes there were, and it appears that they are beginning to make a comeback. This version of the single-speed bike is probably my favorite, if for no other reason than the simple elegance of the design.

It is an all-black frame (although you can get this bike in several different colors, you can even change the wheel colors too) with beautiful Thickslick tires embroidered with the Thickslick name. If you like the ability to customize a bike to your liking, then you will love this bike from Pure Cycles.

Of course, it can’t be all about the looks of the bike. There has got to be some substance too, and the Pure Cycles Original Fixed Gear Bike delivers in that area as well. This bike has a flip-flop hub that allows the rider to determine whether they ride it as a fixed gear or a traditional single-speed bike (I like the single-speed option best).

It also sports a high-tensile, tack-welded steel frame made with frame durability in mind, and the slim nylon pedals don’t just look awesome, they pedal smoothly as well.

If you live in a flat area and are looking for a gorgeous fixed bike, I firmly believe you’ll be happy with this bike. As far as I can tell, everybody who purchases the Pure Cycles Original Fixed Gear Bike fall in love with it. Make sure you check out all of the different color combinations they have to offer.

Once again, fixed-gear bikes are taking the world by storm, and it is easy to see why. Fixed bikes easily have the most attractive designs out there. The streamlined design with retro finishes looks amazing, and the bikes handle incredibly well.

Critical Styles take on this classic form of the bicycle doesn’t leave much to be desired. These bikes have a flip-flop hub because some of us cannot stand the idea of having to move our feet with the pedals when we aren’t actually pedaling. I also appreciate how smooth the ride on this bike is. If you aren’t traveling over a whole bunch of rocks or hitting potholes, you’ll almost forget that this bike doesn’t have a suspension system on it.

In all honesty, there isn’t anything I don’t like about this bike. It is lightweight, has a strong frame, dependable stopping power, and isn’t going to cost you a whole slew of cash. The reason it makes runner-up (as opposed to best) fixed gear bike is simply because I like the Pure Cycles design a little more. But make no mistake, Critical Cycles Harper Single-Speed is an awesome bike. 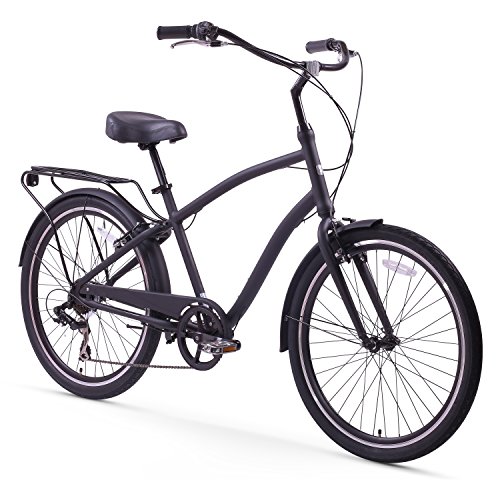 This is a terrific bike for those of you who need a little bit of extra storage space on the back of your bike. Not only that, but it also comes equipped with full fenders on the front and rear wheels. You’ll need this when riding through puddles.

What I like most about the bike how smooth and seamless changing gears are on it. The frame is ultra-lightweight, and the brown synthetic leather saddle is a nice touch as well. The bike is overall an attractive piece of manufacturing, and I surely wouldn’t mind riding it around the city strictly for cruising purposes. You’ll love the Sixthreezero 7-Speed City Bike, I’m sure of it.

How to Choose The Best Commuter Bike

Choosing a commuter bike shouldn’t be too hard for you, there really isn’t much to it. But even with that being the case, there are a few things you should keep in mind. The single most important aspect is to make sure you get a comfortable bike that is reasonable for the type of riding you’ll be doing. If you get a bike that is uncomfortable and doesn’t compliment the areas you traverse, you aren’t likely to be riding your bike to work for long.

You’ll need to look at the miles you’ll be riding each day, and how flat or hilly the terrain is. And of course, whether or not the bike fits your personal style. You may also want to look into getting something that has the capability to carry luggage or even some mudguards for the inevitable rainy day.

Pretty much any bike can be used as a commuter bike, all you need is two wheels, a chain, handlebars, and brakes. Of course, a saddle would be nice as well. Here are some of the best types of bikes to look at for commuting purposes.

Flat-bar bikes (also known as hybrid bikes) are great for commuting. They are able to be upgraded pretty easily, the flat handlebars make an easy and comfortable, and upright ride in traffic, and the rigid fork keeps the bike light and easy to maneuver.

Folding bikes do just what their name implies; they fold into small packages making storing the bike once you get to your destination much easier. These bikes are also good for those who are taking the train or bus and want to break their bike down during parts of their commute.

The biggest issue you will run into with folding bikes is how heavy they are. Also, they don’t handle nearly as well as other bikes. This is mostly due to their smaller-sized wheels, don’t expect to be able to build up much speed, or make quick decisive turns with folding bikes.

These are great if you need to carry some additional luggage with you, plus they almost always come equipped with mudflaps. These are excellent for flat terrain, but I wouldn’t recommend them for hilly roads. Town bikes are pretty heavy, and you probably won’t have much fun riding these uphills

Single-speed bikes, are lightweight, durable, and don’t require much maintenance. They are going to be a bit uncomfortable the first time you ride them though. The reason for this is because it is a fixed-gear bike, which means there is no free pedaling on these bikes. If your wheels are moving, then your pedals are also moving.

Commuting to and from work can be a complete pain. But getting a commuter bike can make that trip to work a little better at times. Not only are you able to bypass that gridlock traffic we all hate so much. But you’ll also save some money and get some exercise as well. Plus, biking to work is especially rewarding on a beautiful day.

If you are thinking about getting a bike to make your daily commute, you should seriously consider getting the best commuter bike. They are simple, inexpensive, and massively fun to ride. Just be sure to follow all safety precautions.